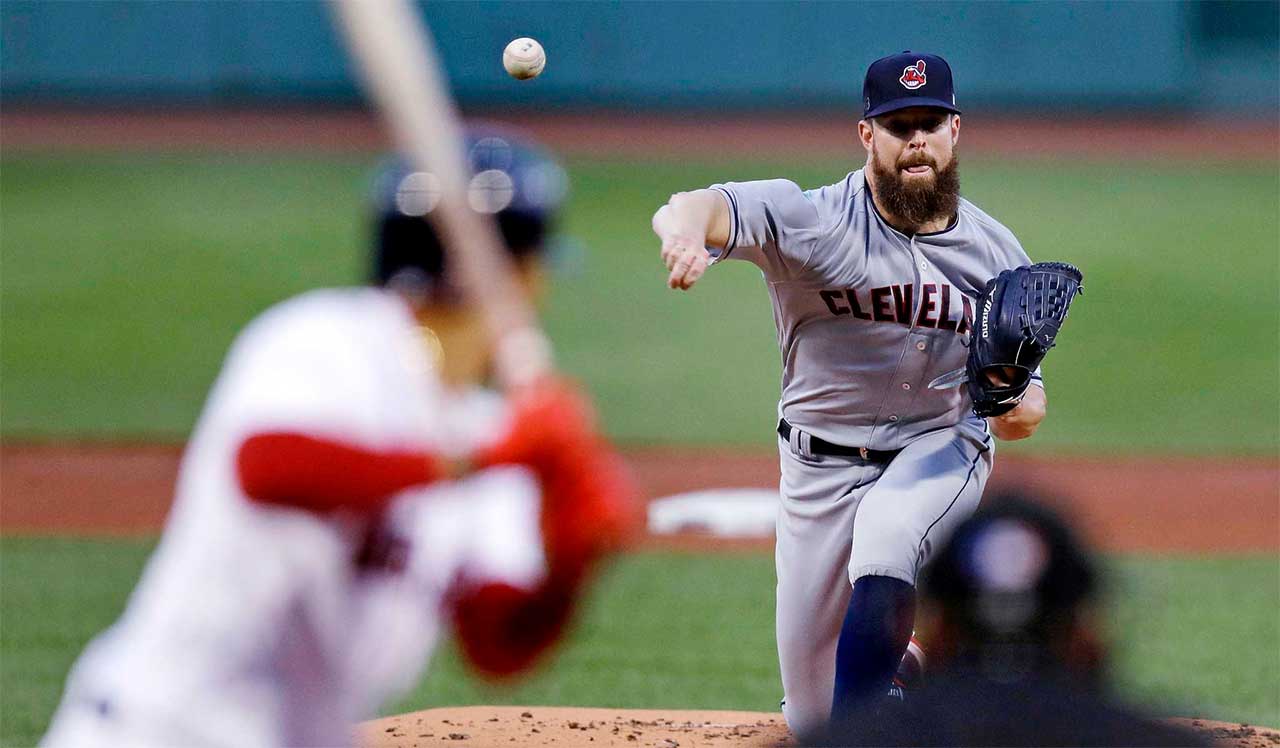 Boston pitcher Rick Porcello had the wind knocked out of him after taking a hard liner to the stomach. Two pitches later, Cleveland's Greg Allen knocked the energy right out of Fenway Park.

Allen hit a go-ahead home run in the seventh inning right after Porcello was struck, Corey Kluber tied for the major league lead with his 16th win and the Indians beat the Red Sox 5-4 Monday night.v

"That was intense," Allen said. "You really weren't sure (if he was staying in) especially after a hit like that."

In a meeting of AL division leaders - and a matchup of the last two Cy Young Award winners, it was 3-all into the seventh.

Porcello (15-6) retired the leadoff batter and walked the next hitter. Yan Gomes followed with a liner that hit Porcello near the stomach - Porcello retrieved the ball near the mound, threw to second for a forceout and then slid to his knees, grabbing the spot where he was hit.

Porcello was checked on the mound, took a practice toss or two, and stayed in the game. Allen then sent a drive into the Indians' bullpen for his second home run of the season.

"I don't think the one that hit him had any effect on the next pitch. The first changeup was a good one," Boston manager Alex Cora said. "Then he threw another one and he hung it."

Porcello said after he caught his breath that he was fine. He was more bothered by what he threw after that.

"The pitch to Allen - I'm not trying to take anything away from him - but I think even I could have hit that one pretty hard," he said. "That was not a good pitch and it came at the worst possible time."

Kluber (16-6) pitched into the seventh inning and matched Washington's Max Scherzer and the Yankees' Luis Severino for the most victories in the majors.

Xander Bogaerts had an early two-run single and an RBI single in the ninth for East-leading Boston.

The Red Sox had the first two runners on against closer Cody Allen in the ninth, and scored a run on Bogaerts' dribbler with two outs before Ian Kinsler flied out with two runners on base, leaving them with just their fifth loss in 22 games.

Allen posted his 25th save.

"You can breathe a sigh of relief after throwing 27 pitches and 20 of them were questionable and seven of them were good," he said.

Kluber, who won his second Cy Young Award last year, gave up three runs and nine hits, striking out six and walking one in 6 1/3 innings.

Trailing 3-0, Cabrera homered into Boston's bullpen in the fifth and Brantley hit his drive into Cleveland's bullpen the next inning.

Bogaerts flicked a low-and-away pitch into right-center with two outs in the first for his single.

Andrew Benintendi's opposite-field RBI single made it 3-0 in the third.

Francona, who managed the Red Sox from 2004-11, talked about one of his favorite players, Boston 2B Dustin Pedroia, who has missed most of the season recovering from offseason left knee surgery.

"There's nobody like him and I don't imagine there will be," Francona said. "He willed himself to be the player he is, and his body is paying for it."

The clubs combined for a half-dozen highlight defensive plays. The best two were: a long running grab by CF Allen off the bat of Kinsler and a diving catch by LF Benintendi, robbing Allen.

Members of both pitching staffs were tossing footballs around in opposite sides of the outfield about 3 1/2 hours before the start, with Boston's crew laughing and smiling as it ran fly patterns.

Indians: Rookie RHP Shane Bieber (6-2, 4.37 ERA) is scheduled to make his first career start against the Red Sox on Tuesday.

Thank you for contacting us.

We will get back to you as soon as possible.